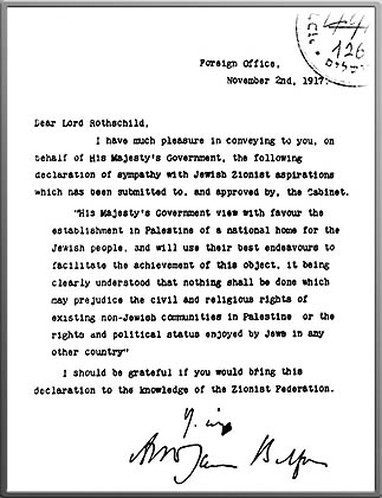 A Little Background
The Balfour Declaration was a product of years of careful negotiation. After centuries of living in a diaspora, the 1894 Dreyfus Affair in France shocked Jews into realizing they would not be safe from arbitrary antisemitism unless they had their own country.
In response, Jews created the new concept of political Zionism in which it was believed that through active political maneuvering, a Jewish homeland could be created. Zionism was becoming a popular concept by the time World War I began.
World War I and Chaim Weizmann
During World War I, Great Britain needed help. Since Germany (Britain's enemy during WWI) had cornered the production of acetone -- an important ingredient for arms production -- Great Britain may have lost the war if Chaim Weizmann had not invented a fermentation process that allowed the British to manufacture their own liquid acetone. It was this fermentation process that brought Weizmann to the attention of David Lloyd George (minister of ammunitions) and Arthur James Balfour (previously the British prime minister but at this time the first lord of the admiralty). Chaim Weizmann was not just a scientist; he was also the leader of the Zionist movement.
Diplomacy
Weizmann's contact with Lloyd George and Balfour continued, even after Lloyd George became prime minister and Balfour was transferred to the Foreign Office in 1916. Additional Zionist leaders such as Nahum Sokolow also pressured Great Britain to support a Jewish homeland in Palestine.Alhough Balfour, himself, was in favor of a Jewish state, Great Britain particularly favored the declaration as an act of policy. Britain wanted the United States to join World War I and the British hoped that by supporting a Jewish homeland in Palestine, world Jewry would be able to sway the U.S. to join the war.
Announcing the Balfour Declaration
Though the Balfour Declaration went through several drafts, the final version was issued on November 2, 1917, in a letter from Balfour to Lord Rothschild, president of the British Zionist Federation. The main body of the letter quoted the decision of the October 31, 1917 British Cabinet meeting. This declaration was accepted by the League of Nations on July 24, 1922 and embodied in the mandate that gave Great Britain temporary administrative control of Palestine.
The White Paper
In 1939, Great Britain reneged on the Balfour Declaration by issuing the White Paper, which stated that creating a Jewish state was no longer a British policy. It was also Great Britain's change in policy toward Palestine, especially the White Paper, that prevented millions of European Jews to escape from Nazi-occupied Europe to Palestine.

The Balfour Declaration: The Move Towards Israel--African-American or Ancient Hebrew Pt. 2b 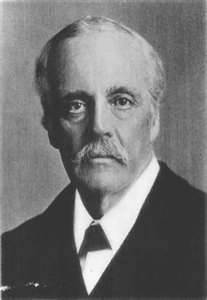 I have much pleasure in conveying to you, on behalf of His Majesty's Government, the following declaration of sympathy with Jewish Zionist aspirations which has been submitted to, and approved by, the Cabinet.

"His Majesty's Government view with favour the establishment in Palestine of a national home for the Jewish people, and will use their best endeavours to facilitate the achievement of this object, it being clearly understood that nothing shall be done which may prejudice the civil and religious rights of existing non-Jewish communities in Palestine, or the rights and political status enjoyed by Jews in any other country."

I should be grateful if you would bring this declaration to the knowledge of the Zionist Federation.