Please Do Your Own Research-Truth is Knowledge and Reading is Fundamental!!! 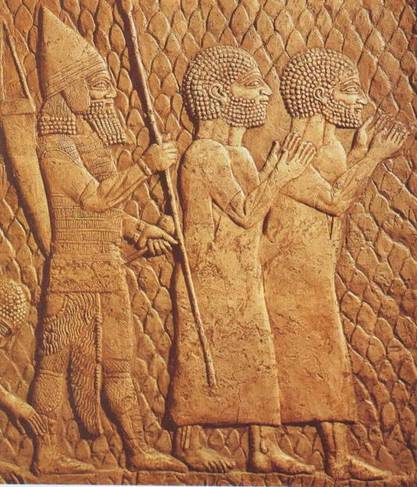 Assyrian siege of the Israelite city Lachish (British Museum in London)
The tribes of the Northern Kingdom of Israel were conquered time and time again by different Assyrian kings.  The tribes that make up the Northern Kingdom of Israel are:  Reuben, Asher, Issachar, Manasseh, Zebulun, Ephraim, Dan, Gad, and Naphtali.  The tribe of Levi is included in this also.  The Levites did not have an assigned land because of their priestly duties they were spread throughout all the tribes of Israel.  The thing that the Assyrians did when they conquered a land, they  would exile the inhabitants to another place and move their people into the lands.  This is what happened to the Northern tribes when the Assyrians invaded.  These tribes were never allowed to come back into their land.  In the Egyptian and Babylonian exile/slavery the Israelite's were allowed back to their land to rebuild after the time of bondage was over.
Assyrian King Tiglath-Pileser III known as Pul started off the invasion of the Northern Kingdoms  of Israel conquering Zebulun, Naphtali, Gad, and Manasseh.

2 Kings Ch.15:29(v29)In the days of Pekah king of Israel came Tiglathpileser king of Assyria, and took Ijon, and Abelbethmaachah, and Janoah, and Kedesh, and Hazor, and Gilead, and Galilee, all the land of Naphtali, and carried them captive to Assyria.

20 years after the first exile of the Israelites, Assyrian king Sargon II took Samaria.  This happened after his father Shalmaneser V laid waste to Samaria with a three year siege.

2 Kings Ch.18:11-12(v11)And the king of Assyria did carry away Israel unto Assyria, and put them in Halah and in Habor by the river of Gozan, and in the cities of the Medes:(v12)Because they obeyed not the voice of Yahuah their Elohim, but transgressed his covenant, and all that Mosheh the servant of Yahuah commanded, and would not hear them, nor do them.
Assyrian king Sennacherib, probably the most boastful king took the rest of the Northern Kingdoms and even invaded some of the Southern Kingdom of Yahudah(Judah).  He is most famous for the siege of Lachish.

Isaiah Ch. 36:1-2(v1)Now it came to pass in the fourteenth year of king Hezekiah, that Sennacherib king of Assyria came up against all the defenced cities of  Yahudah, and took them.(v2)And the king of Assyria sent Rabshakeh from Lachish to Jerusalem unto king Hezekiah with a great army. And he stood by the conduit of the upper pool in the highway of the fuller's field.

Sennacherib had a large wall artifact made on the wall of his palace of the relief,  at the siege of Lachish.  The picture above is part of the artifact depicting Sennacherib famous and most successful invasion. This is a picture of an Assyrian officer leading Hebrew Israelites to exile. This artifact can be seen at the British Museum in London.  They are stone panels taken from the South-West Palace of Sennacherib in Ninava.

Click the link below to visit the British museum online and observe the panels
http://www.britishmuseum.org/explore/highlights/highlight_objects/me/s/stone_panels,_sw_palace-2.aspx

Warned by the Most High

The Most High gave the Northern Israelite tribes warnings that this would happen due to their lack of obedience.  Lets check out 2 Kings 17:7-18:
(v7)For so it was, that the children of Israel had sinned against Yahuah  their Elohim, which had brought them up out of the land of Egypt, from under the hand of Pharaoh king of Egypt, and had feared other gods,(v8)And walked in the statutes of the heathen, whom Yahuah cast out from before the children of Israel, and of the kings of Israel, which they had made.(v9)And the children of Israel did secretly those things that were not right against Yahuah their Elohim, and they built them high places in all their cities, from the tower of the watchmen to the fenced city.(v10)And they set them up images and groves in every high hill, and under every green tree:(v11)And there they burnt incense in all the high places, as did the heathen whom Yahuah carried away before them; and wrought wicked things to provoke Yahuah to anger:(v12)For they served idols, whereof Yahuah had said unto them, Ye shall not do this thing.(v13)Yet  Yahuah testified against Israel, and against Yahudah, by all the prophets, and by all the seers, saying, Turn ye from your evil ways, and keep my commandments and my statutes, according to all the law which I commanded your fathers, and which I sent to you by my servants the prophets.(v14)Notwithstanding they would not hear, but hardened their necks, like to the neck of their fathers, that did not believe in Yahuah their Elohim.(v15)And they rejected his statutes, and his covenant that he made with their fathers, and his testimonies which he testified against them; and they followed vanity, and became vain, and went after the heathen that were round about them, concerning whom Yahuah had charged them, that they should not do like them.(v16)And they left all the commandments of Yahuah their Elohim, and made them molten images, even two calves, and made a grove, and worshipped all the host of heaven, and served Baal.(v17)And they caused their sons and their daughters to pass through the fire, and used divination and enchantments, and sold themselves to do evil in the sight of Yahuah, to provoke him to anger.(v18)Therefore the Yahuah was very angry with Israel, and removed them out of his sight: there was none left but the tribe of Yahudah only. 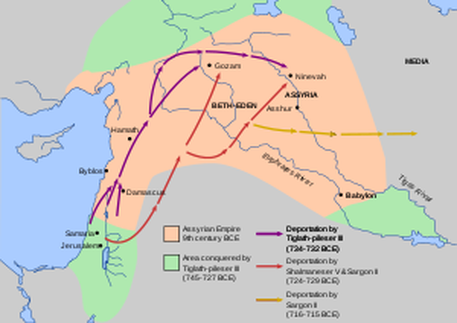 The Assyrian Empire deportation of the Northern Kingdom of Israel . 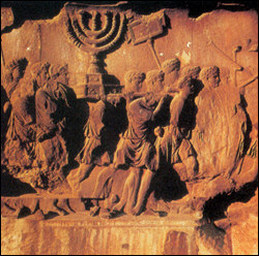 Matthew 24:1-2-And Yahushua went out, and departed from the Temple: and His disciples came to Him for to shew Him the buildings of the Temple. And Yahushua said unto them, "See ye not all these things? Verily I say unto you, there shall not be left here one stone upon another, that shall not be thrown down.

(v41)And when he was come near, he beheld the city, and wept over it,(v42)Saying, If thou hadst known, even thou, at least in this thy day, the things which belong unto thy peace! but now they are hid from thine eyes.(v43)For the days shall come upon thee, that thine enemies shall cast a trench about thee, and compass thee round, and keep thee in on every side,(v44)And shall lay thee even with the ground, and thy children within thee; and they shall not leave in thee one stone upon another; because thou knewest not the time of thy visitation.

The Jewish wars started around 66 A.D.  when the Hebrews revolted against the authority of Rome.  In 70 A.D. Titus and the Roman army  arrived in Jerusalem at the northern outer most wall.  After five months of attacks, the walls of the famed city came tumbling down, the city was destroyed, and the temple burnt to the ground.  The Hebrews were totally out numbered by the Roman army.  The Hebrews had around 24,000 in their army while Rome had an army of 30,000.  Over one million Hebrews where killed, 95,000 Hebrews were taken captive to Caesarea, and the rest fled to Northern and Western Africa to escape Roman persecution and slavery. 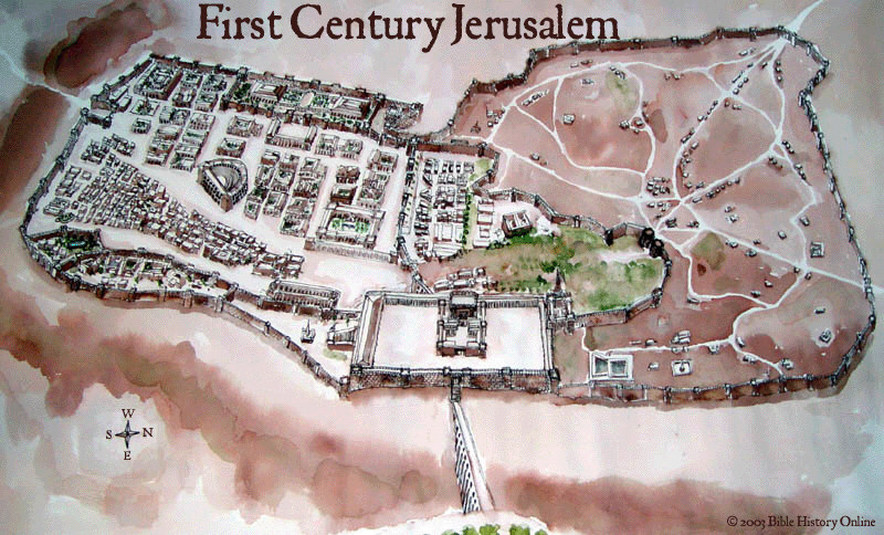 The Negro Project:  The World Wide Plan to Destroy The Children of Yisra'el
Created and posted by JAC7910

After the destruction of Jerusalem and the temple many Hebrews fled into Africa.  Between the periods of Pompey and Julius Ceasaer about 1,000,000 Hebrews fled to Africa.  The Hebrews hid and lived in Africa for over 1,500 years from 70 A.D. to 1619 A.D.

George E. Lichtblau author of "Jewish Roots in Africa" had this to say in his book about the Hebrew dispersion into Africa:
‘Pressed under sweeping regional conflicts, Jews settled as traders and warriors in Yemen, the Horn of Africa, Egypt, the kingdom of Kush and Nubia, North African Punic settlements (Carthage and Velubilis), and areas now covered by Mauritania. More migrants followed these early Jewish settlers to Northern Africa…’

Rudolf R Windsor author of "Babylon to Timbuktu" said this in his book on page 120:
‘The black Jews who migrated to the Sudan from the North converged with the Jews migrating from the eastern Sudan to the countries of the Niger River…There is much proof, and still much more to be revealed by scholars, that there existed prior to the slave trade and subsequent to it many tribes, colonies, and kingdoms in West Africa’.
Below is a map and key describing  North Africa and the Israelite migrations into those lands after 70 A.D. 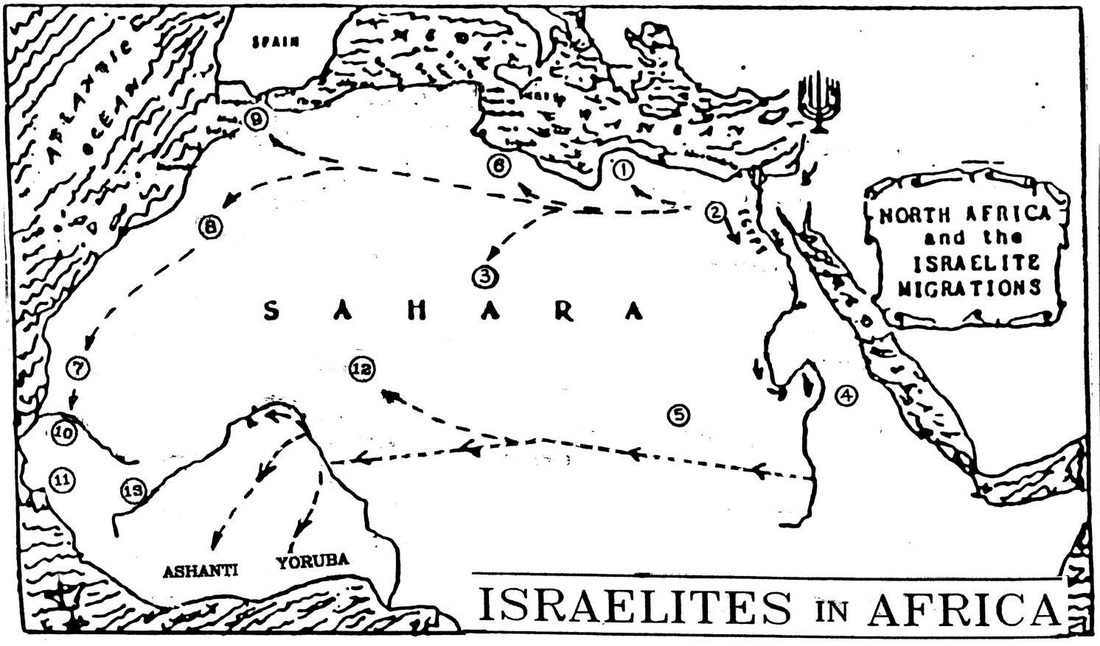 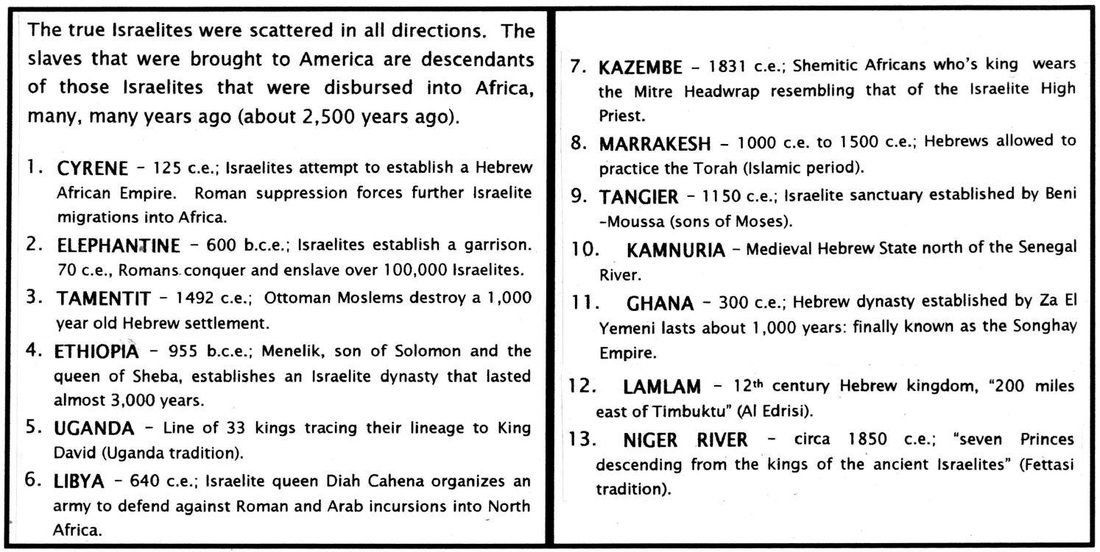 This is a major part of history that is barely talked about or taught.  The Ancient Hebrews should show us all, that if you make a covenant with the Most High and then continuously break it, the Most High will take away your heritage.  We have a heritage through Yahshua
Ha' Mashiah, and if we keep walking in darkness our heritage through Him will be taken away. Wake Up Israelites and take your rightful position as a peculiar, royal priesthood, fashioned to honor, and worship the Most High.

Darrell G. Young(February 2004).  Oh Jerusalem, Thou that Killeth the Prophets.  The Fall of Jerusalem in 70 A.D.
http://focusonjerusalem.com/thefallofjerusalem.html