Please Do Your Own Research-Truth is Knowledge and Reading is Fundamental!!!
"Please Watch Videos Near The Bottom of This Page" 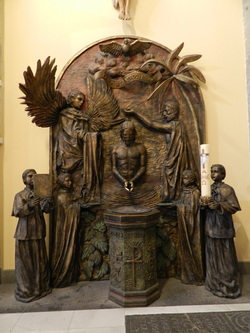 Today's christian church is not remotely close to the same as the one Yahushua established. The church is less spiritual and hearty than those of former times. The  different forms and ceremonies of paganism gradually crept into the worship. Some of the old heathen feasts became church festivals with change of name and of worship. In about 405 A.D. images of saints and  martyrs began to appear in the churches, at first as memorials, then in succession revered, adored, and worshiped. The Creator's supper became a sacrifice in a place of a memorial and elder's evolved from a preacher into a priest.  There are more than 400 different denominations and sects all calling themselves "Christian". All of them having some type of different idea, tradition, and approach yet claiming to follow the One True Savior. Many people have "accepted" the religion passed down through their families.  Of course, the real underlying cause of this massive religious apostasy is that this is satan's world and that he has totally deceived the vast majority of humanity. The "Christianity of the New Testament simply does not exist... what has to be done is to shine light upon a criminal offense against Christianity prolonged through centuries, perpetrated by millions, whereby they have cunningly, under the guise of perfecting Christianity, sought bit by bit to cheat YHWH out of Christianity and have succeeded in making Christianity exactly the opposite of what it is in the New Testament.  Observances rooted in paganism break the first two of the ten commandments.  To learn more about Paganism in Christianity check out the correlating sub pages Sunday Shabbath, the holidays and the prosperity/charismatic movement.

What is Christianity, better yet where did it originate from really?  It was started during the age of the Ha'Mashiah{Messiah}, they were followers of the "The Way", that was the name of the movement following Yahushua(Jesus).  After the death of Yahushua you will be very surprise to find out that Christianity is no more than different elements of Hellenism, Paganism, Judaism, and sun worship,  What, how is this you say, well during the Byzantine Empire  the patriarchs of the original movement of "The Way" joined with the different emperors to form a "church-state" rule.  Since the time of Augustus, emperor worship held Rome together. Constantine in the early 320's intertwined his sun god worship with christian philosophy and thereby created what we know of today as Christianity. However during the Gregorian rule the things changed slightly gearing towards a turn in philosophy of the church. In 386 Augustine of Hippo-St Augustine developed the blueprint for the "age of faith". The Emperor at that time Theodosius  made Christianity the Roman state religion. They used this faith as the only thing capable of uniting them even in the midst of fighting one another. No matter what regime Christianity withstood a face lift more than 5 times throughout history. Each and every ruler, emperor, or king for that matter changed Christianity just a little to suit their standards and beliefs. Just as Augustine set up the classic and theological foundation for the Christian movement, Gregory the Great-Pope Gregory I set up the medieval church, it mirrored courtrooms, replacing the judges throne, to an altar. he wrote and established pastoral practices found in Cura Pastoralis this book detailed liturgical form and the chants within it are all Gregorian. In 1095 Pope Urban II transformed the Christian movement,  even closer to what we know as the Catholic religion this is the era of the Crusades where Christians were fighting against Saracen in the struggle for the Holy Land. The History goes on and on just know that through these people, and their ideas Christianity is merely Greco-Roman heritage and Germanic culture fused together, and this is what shaped the religion for the New World in the West.

So in the New World around 1492 Hernan Cortes and Francisco Pizarro were exploring for Spain and they came across the Aztecs in Mexico and the Incas in Peru. They didn't agree with the religious practices of these people and they destroyed their temples and built churches, they destroyed their idols and set up saints. What Christianity does is accommodate the special needs and conditions of a religion they even tolerate ritualistic practices, as long as they uphold to their central doctrines and rituals. This is hypocrisy, about 100 years later this same religion was used to coerce and coax  the Afrikan tribes into slavery. Christianity is responsible for the division we experience today. There are thousands of different religions and hundreds of different denominations within Christianity and all the denominations disagree about the nature of the Most High and what it means to serve him. Yahuwah is not the author of confusion, and this religion is the cause of many wars, destruction and death throughout history and today. 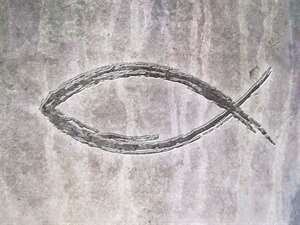 One commandment that Christianity refuses to follow is the second commandment, "You do not make for yourself a carved image, or any likeness of that which is in the shamayim above, or which is in the earth beneath, or which is in the waters under the earth."  Lets take a look at the King James version of this verse just in case there is some misunderstanding of the Hebrew translation-"Thou shalt not make unto thee any graven image, or any likeness of anything that is in heaven above, or that is in the earth beneath, or that is in the water under the earth."  Almost every Christian church in this nation of ours have some type of graven images in their building.  You got everything from crosses, praying hands, depictions of heavenly beings and images of the Messiah floating around in these church buildings.  Are these not images that are suppose to be the likeness of anything in heaven above and in the earth.  Many people knowingly and unknowingly bow and lay prostrate before these images thinking that they are worshiping the Almighty. Now lets see what the second part of the second commandment says:  "You do not bow down to them nor serve them."   In Christianity the congregation or a better stated word "flock" looks to their pastor(Shepard) for the majority of their spiritual advice.  The majority of the time this ends up with the pastor being the object of worship over the Most High.  This is true, whether you like it or not.  Ohhh, pastor was preaching today!  Go ahead pastor!  Pastor said!  Pastor ushered in the Holy Spirit!  Preach pastor!  These are just a few phrases that you would hear from people in the congregation.  Yeah sure your going to hear your thank you Jesus or God but you best believe that the main focus of attention is on the pastor.  People don't talk about The Most High after church like they talk about the pastor.  The sad thing about this is that these so called men of the Most High bask in the glory of their flock's overwhelming praise and admiration for them rarely or never rebuking them for making him/her the object of worship.  We should not be surprise about the idol worship in Christianity-it was developed by a pagan sun worshiping Roman Emperor and a group of pagan sun worshiping priest in a counsel.  The Most High said no idols, that means crucifixes, images of angles, images of the Messiah, images of saints and martyrs, praying hands, rosary beads, cherubims, seraphims, christian fish signs, wailing wall, religious relics, pastors, priest,  Popes and so forth.
Please watch the video below about idol worship
Idol Worship The Church Vs.The World
Created and posted by. Mashah Yashar'al

Basically it's like this, all in all Christianity's foundation is based on paganism and rooted out of the Roman Empire! It's sad people won't do their research to find out what religion they are actually following and how their traditions came about. The religion was not founded by Yahushua and his disciples, it was merely intertwined with sun-god worship to please an emperor when he was in rule. Yahushua came to redeem us from our sins not to create a whole new religion abolishing His Father's work!

Paganism In Christianity
A Visual/Audio Presentation